Are you like me and forgot that you are aboard NASA’s Atlas V-541 rocket headed for Jezero Crater, Mars? We land soon!

MISSION STATEMENT
The goal of the Mars Exploration Program is to explore Mars and to provide a continuous flow of scientific information and discovery through a carefully selected series of robotic orbiters, landers and mobile laboratories interconnected by a high-bandwidth Mars/Earth communications network.

SCIENCE GOALS
The Mars Exploration Program studies Mars as a planetary system in order to understand the formation and early evolution of Mars as a planet, the history of geological processes that have shaped Mars through time, the potential for Mars to have hosted life, and the future exploration of Mars by humans. The strategy has evolved as we have learned more about Mars and as more questions have arisen. We have gone from “Follow the Water” to “Explore Habitability” to “Seek Signs of Life.”

Today’s the day.
Live Broadcast of Perseverance's arrival on Mars is streaming to Earth now.

These images were taken by the Perseverance rover shortly after landing safely on Mars on Feb. 18, 2021. The thumbnail views show the front and rear of the rover.

The Perseverance rover touched down safely on Mars on Feb. 18, and sent back its first pictures immediately after landing. These views show what’s in front of and behind the rover. Images | Mission Updates


Mission team reacts with raised arms and cheers after Perseverance lands on Mars. 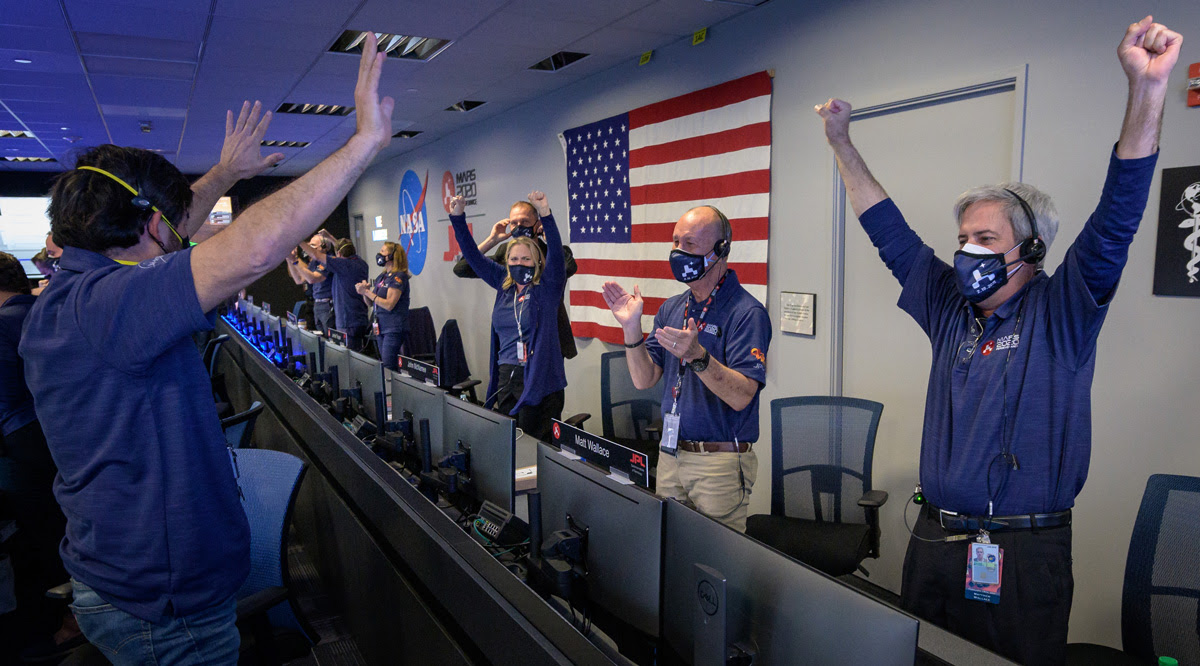 Missed the landing? No worries: watch a replay of the full show

or jump into the action with this one-minute video recap.


While we wait for the actual sounds of Mars recorded by the rover, try this interactive demo to hear how some familiar sounds would be different on Mars.
https://mars.nasa.gov/mars2020/participate/sounds/

This recording was made by the SuperCam instrument on NASA’s Perseverance Mars rover on Feb. 19, 2021, just about 18 hours after landing on the mission’s first sol or Martian day. The rover’s mast, holding the microphone, was still stowed on Perseverance’s deck, and so the sound is muffled, a little like the sound one hears listening to a seashell or having a hand cupped over the ear. Just a little wind can be heard.
Credit: NASA/JPL-Caltech/LANL/CNES/CNRS/ISAE-Supaero

Return to “Table with a View 🌴”